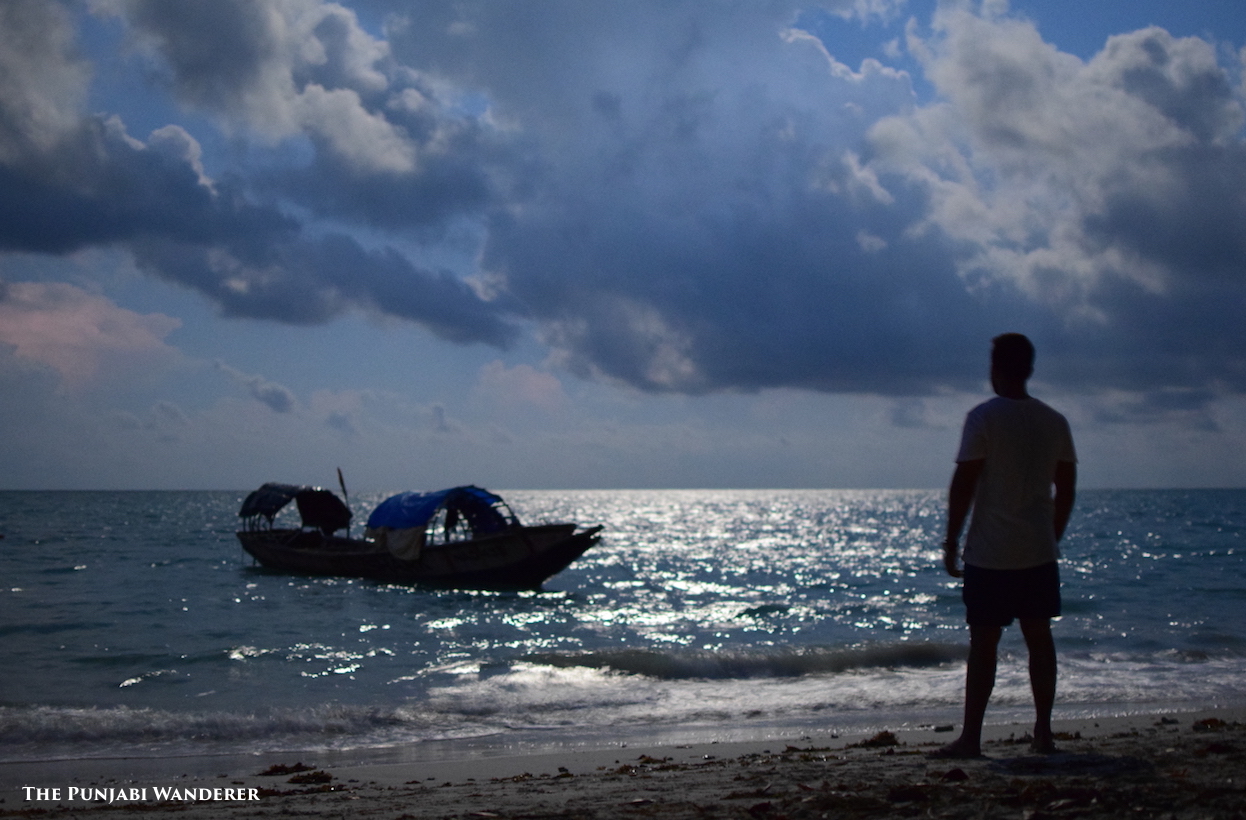 A long pending wish of witnessing pristine beaches and trying my hand at scuba was the driving force for this trip. Some R&D and I shortlisted Havelock and Neil islands for my 5-day trip. These islands are in the central part of the island group, northern part has various tourist destinations, but I had already covered them in my previous Andaman trip. So in a way, this trip for me, was like adding yet another page to my “Andaman Diaries”.

With my destination decided, I contacted ‘Dive India’ for the scuba dive. They had stay-options as well, so everything was sorted for Havelock. Neil was left unplanned. Now, it was the turn for air tickets. I got Delhi-PortBlair return ticket for 13k using some discount offers.

Scroll down to the end for the video or continue reading if you are up for getting a feel of my experience :) .

An early morning flight from Delhi landed me at Port Blair at 1 pm. The plan was to reach Havelock the same day. My friend Pushkar, who reached an hour earlier, had got the tickets for the 2:00 pm Makruzz ferry to Havelock.

Jetty is just 10-15 minutes from the airport, so catching the ferry was not an issue. Though we got the tickets on the same day from their office, but you should get your ferry tickets booked online in advance. There are two private players and a government ferry as well. Ticket of the government ferry is cheap but difficult to get, so we chose Makruzz which costed us Rs 1000 per head. Also, plan your flights according to the ferry timings from Port Blair to the island of your choice, or stay in Port Blair for a day and go to your other island destination the next day.

The ferry took nearly 2.5 hrs to reach Havelock. From the jetty at Havelock, we took an auto straight to Dive India. There we got a basic accommodation for Rs. 500 a day. If you are okay with using shared (clean) washrooms, it is a very good deal. This type of accommodation is available at other places as well. So, you might get a cheaper deal somewhere else. The next thing we did was hiring a gearless scooter (Activa) for Rs. 350 a day.

It gets dark at 5 pm in Havelock, so the only thing we could do was drink and eat, or a stroll along the beach. There are many good restaurants around like Golden Spoon, Anju Coco where you can have some good food. A dish at Golden Spoon[/caption]

There is only one wine shop, so refill your stock before it closes. You can drink all night sitting on a beach, its 100% safe – no crocs and no snakes! We had planned Kalapathhar beach and Radhanagar Beach for the day. Both these beaches are in the opposite directions. Radhanagar is famous for its sunset, so after having our breakfast, we started towards Kalapathhar Beach. It took just 10-15 minutes to reach the beach. This was the first time I saw a Havelock beach in its full glory – the blue waters, white sand and bare minimum people. After spending some time there, we headed back to the main city and had our lunch. After indulging in some leisure activities, it was time to witness the much-famous sunset at Radhanagar beach. The road to Radhanagar beach is quite bad and the distance is also much more than the Kalapathhar. It took us around 20 minutes to reach the beach and the sun was already setting. A huge crowd had gathered here, making it the most crowded spot on the island. After it got dark, we roamed around, had our dinner and then headed back to our backyard beach with a bunch of drinks.

This was the scuba diving day. Getting up early at 6:30 was a task after a few bottles of beer the night before. But somehow I made it. Dive India gave me the dive suit and then they took me to the dive site. There was a 10-15 min session of all the do’s and dont’s before the dive. I was a bit nervous initially, but slowly as I started seeing the marine life, I forgot all the potential threats to my life :D . It was a half-an-hour dive in which I saw a variety of marine life including sea urchins, lion fish, parrot fish, clown fish, etc. The only problem was that I felt some pain in my ears due to the atmospheric pressure, but that was taken care of by the technique they teach you before the dive. Me and the clown fish.[/caption]

After the dive, we thought of taking the trek route to Elephant Beach. There is a ferry route as well, but the route through the jungles seemed fun. The starting point is on the road to Radhanagar Beach. After we started the trek, we found that it was too muddy, thanks to the rain a few days earlier.

Pro-tip: Wear full-length clothes and shoes if you plan to do a trek to Elephant Beach.

The trail went from bad to worse. My trek-mates were not wearing proper clothing and shoes, so we had to return back.

It was still 2 in the afternoon , so we decided to go to Radhanagar Beach, again. It was a different scene than the last evening. The sun was bright, waters were blue and waves were on a different energy level. We went in to the sea to enjoy the waves and I still cant get the sand out of my clothes :) . Pro Tip: Don’t wear any loose accessories like sun glasses , pendants. One high wave, and you can lose ‘your precious’, like me.

After losing ‘my precious’ , we came back to Dive India resort and played some beach volleyball. Dont imagine some bikini clad girls, it was just two normal punjabi guys !

Rest of the evening was spent on the beach, with some drinks.

We had planned to go to Neil island and had got our cruise tickets booked on Day 2. We had already ran out of money and were not sure about the ATMs in Neil. Just to put things in perspective, these were the starting days of demonetization drive. The ferry was delayed due to some technical issue, so we got a chance to stand in the ATM queue for 2 hours and get some cash for the rest of our trip.

Reaching Neil, we were lucky to find a resort for Rs 600 per night and this time it was with an attached washroom ( I count it as a luxury now ). We hired a scooty here as well for Rs 400 a day. The Natural Bridge was just a 5 minute drive from our resort. So, we started our Neil exploration with the Natural Bridge only. It was a low tide, so we were able to walk up to the bridge. In the excitement of seeing the natural bridge, people often forget to give attention to the colorful marine life right under their feet. But I would never ever do that. We kept our heads down and saw a variety of corals, fishes and crabs and then saw a beautiful sunset. The evening was spent again on the beach, but this time with tea.

This was the last day of the trip, but we wanted to make the most of it. We got up at 4 and drove to Sitapur beach for the sunrise. I was amazed to see around 10 people already on the beach. The clouds posed some threat but we were able to witness a gorgeous sunrise. Now it was time to head back to Port Blair and then board a long flight back to Delhi.

Thanks for choosing to read my story, now enjoy the video.

Time of the year: November